UAC is always pleased to thank our sponsors for their generous support throughout the year. These companies make it possible for our members to stay informed on important products and services, but also create a professional atmosphere whereby UAC is able to keep administrative and functional costs down for our members.

Taylor Hicks is one of the most beloved and popular AMERICAN IDOL winners of all time.

From the start, Hicks’ material on the mega-hit show set him apart, with a unique take on Southern soul, R & B, country and blues. Sixty-four million votes were cast and nearly 37 million American viewers and more than 200 million viewers worldwide tuned in to crown Hicks the Season 5 winner of AMERICAN IDOL, making it one of the most-watched TV events of the last decade.

Hicks’ star continued to rise after he stepped off the IDOL stage. Less than three weeks after his IDOL victory, his debut single, “Do I Make You Proud,” entered at #1 on Billboard’s Hot 100, Pop 100, and Single Sales Charts. Coinciding with the single’s release, a cover story named him People magazine’s “Hottest Bachelor of the Year.” His self-titled album (Arista), debuted at #2 on the Billboard 200 and was quickly certified RIAA Platinum. In 2007, Hicks penned a brisk-selling autobiography “Heart Full of Soul” (Random House). Hicks is the first male IDOL winner to be featured on a Grammy Award-winning album, Jimmy Fallon’s “Blow Your Pants Off,” which took home the 2013 Grammy for Best Comedy Album.

On Broadway, Hicks starred in the hit musical, GREASE as Teen Angel, and when asked to join the national tour, happily agreed. The 18-month tour connected him with fans across North America.

In June 2012, Taylor Hicks began his residency at Bally’s Las Vegas. As a testament to his musical talent and showmanship, Hicks will continue to bring the roadhouse to the Las Vegas Strip with a year-long extension through 2013 at a larger venue, Paris Las Vegas, making him the first Idol winner in history to secure a long term residency in Las Vegas. Hicks has since rapidly evolved into one of the most popular acts in the city. He will have an exclusive commitment to Caesars Entertainment, bringing his soulful ballads to other Caesars properties across the country throughout the year.

On August 30, 2012 Hicks performed at the closing night of the 2012 Republican National Convention, playing to a crowd of 18,500 delegates in Tampa, Florida, and a national TV audience of over 30 million viewers.

Hicks, who hails from Birmingham, Ala., had music on his mind from childhood. As a young adult, he became a fixture around the Southeast, playing concerts and club dates with visiting stars like James Brown, Tom Petty, Jackson Browne, Robert Randolph, Keb’ Mo’ and Widespread Panic, among others. Hicks also released the independent albums “In Your Time” and “Under the Radar.” Later, these albums were compiled and released by Vanguard Records as “Early Works.”

In addition to headlining at Paris Las Vegas and other Caesars Entertainment properties all over the United States, he is currently in studio working on his first country album. 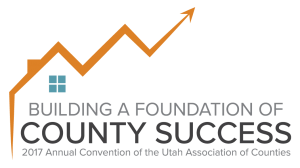 Registration for the 93rd (2017) Annual Convention of the Utah Association of Counties, November 15-17 at the Dixie Center in St. George, is now open. This year’s theme is “Building a Foundation of County Success,” which is a nod to the ideal that county officials are always striving to build better communities for their citizens through partnership, innovation, and hard work.

As has been announced, Cara Brookins, author of Rise: How a House Built a Family, will be the keynote speaker Thursday morning. And former American Idol champion Taylor Hicks will take the stage Friday night at the Closing Banquet.

Agendas will be posted as they are made available by each affiliate and we will notify you as such – typically those will begin to be posted from the end of September to middle of October. Check with your affiliate leadership if you have questions about that in the meantime.

And, as always, we are expected a full slate of exhibitors and sponsors. You can see who those are by clicking here.

Other than that, please click here to register and get more details about the Convention. We look forward to seeing everyone there!

Cara Brookins is the author of Rise: How a House Built a Family, an extraordinary true story of a woman taking the greatest risk of her life in order to heal from the unthinkable. After escaping an abusive marriage, Cara had four children to provide for and no one to turn to but herself. In desperate need of a home, but without the means to buy one, she did something incredible. Equipped only with YouTube instructional videos, a small bank loan and a mile-wide stubborn streak, she built her own house from the foundation up with a work crew made up of her four children. Together they designed the house, framed it, ran the plumbing and gas lines, and mortared blocks with their hands. It would be the hardest thing she had ever done. With no experience nailing together anything bigger than a bookshelf, she and her kids poured concrete, framed the walls and laid bricks for their

Together they designed the house, framed it, ran the plumbing and gas lines, and mortared blocks with their hands. It would be the hardest thing she had ever done. With no experience nailing together anything bigger than a bookshelf, she and her kids poured concrete, framed the walls and laid bricks for their two story, five bedroom house. She had convinced herself that if they could build a house, they could rebuild their broken family.

Building something big enough to change the way she and her kids saw themselves gave Cara the idea that other people could do exactly the same thing. While their big thing may not be a house, taking a leap toward a better life is exactly the right move for everyone.

Cara is a computer analyst and social media marketing expert and the author of seven middle grade and young adult novels. She continues to build new things through her fiction. She motivates businesses, writers, and parenting groups to take enormous leaps toward their goals and to build impossible things.

Cara grew up in Wisconsin and now lives in Arkansas with her four children, Hope, Drew, Jada, and Roman.

Utah Association of Counties is the unifying voice for county government. We represent all 29 counties on legislative matters, but also educate each county official in the current discharge of their professional duties.

We provide a number of smaller meetings and workshops throughout the year, but also host two large conferences – the Annual Convention (held in November each year) and the Management Conference (held in April each year). Both three-day conferences involve the participation of the vast majority of our members in general, individual and join sessions to discuss important issues, share best practices, and become better informed.

Please have a look around our website here to learn more about these conferences.

You can also visit any one of our other websites for information:

www.UACnet.org (our main website providing information and resources to our county official members)

www.UtahLocalGovernmentJobs.com (our official job board for governmental entities and individuals to post and review job listings)